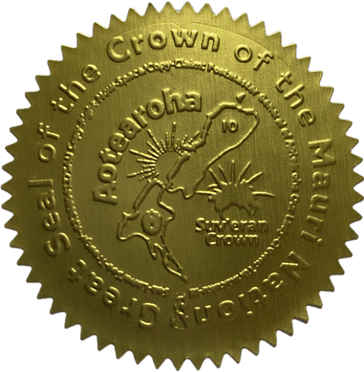 The time for change is upon us all. God bless your perseverance and vision.

Here in New Zealand we are suffering under a government that is fraudulent and is imposing illegitimate laws and edicts on us from the United Nations, a body we did not vote for. These actions are destroying the businesses and peoples of New Zealand under false COVID-19 legislation.

In 1986, the Crown of the United Kingdom vacated its authority and sovereignty over New Zealand. The Queen stepped down and is no longer our treaty partner. In its place is a corporation, using the Constitution Act 1986 that the unconstitutional Parliament put into power, registered with the United States Securities and Exchange Commission in 1934:

A corporation cannot rule over the living, sovereign people. The corporate Parliament never got consent from the people of New Zealand for this deception.

Starting in 1987, the corporation began the selling-off of New Zealand assets, piece by piece.

In 1990, Parliament passed the Constitution Act 1990, in which Section 4 of the Act removes any of our Bill of Rights by any piece of legislation.

In the early 1990s Parliament signed the UN Agenda 21 agreement, the horror of which our farmers are now experiencing daily — the destruction of our food supply.

Also in the 1990s this corporation began its relationship with the Chinese Communist Party (CCP).

In 2015, then Prime Minister John Key signed the UN Agenda 2030 agreement — which is now being fully implemented by the communist Prime Minister, Jacinda Ardern.

Last year, the CCP virus wiped out half a trillion dollars in New Zealand businesses and equity, in the government’s attempt to destroy the middle class and bankrupt its citizens.

The New Zealand total debt is approaching $1Trillion, much of that owed to China.

In a few months, work will begin on a new port in Northland, which will be leased out to China and will also become a Chinese military base.

The New Zealand Government was served!

On 22 December, 2020, we served documents on the Prime Minister, the Governor-General, and the Treasury [headquarters of the corporation]. The Royal Decree Proclamation Judgment and Declaration and Order clearly outlined the fraud, challenged their jurisdiction and ordered the fraudulent government to surrender and vacate.

A Request of Military Assistance Under the 1832 Trade Agreement

We will again implement the 'right of sovereignty' to all peoples that was granted to us in the He Wakaputanga o Te Rangatiratanga o Nu Tireni 1835 agreement and affirmed by King William IV, his Parliament, which is recognised in international law today.

Our formerly proud and strong country will become a free republic once again.

Election Interference and the High Treason of US Ambassador Scott Brown

We want to thank you, Mr President, for having removed the tyrannical Ambassador, Scott Brown, from the shores of New Zealand. His crimes against the people of New Zealand and of the United States, which he falsely represented, are many. The crime of High Treason shall forever be branded on him for his part in aiding and abetting those who perpetrated election interference on a sovereign country. Like the US election, the 2020 New Zealand election was also ‘taken’ illegally by those on and off our shores, using the same election software and tactics that you have been uncovering.

We too saw politicians social media platforms taken down and the unlawful silencing of voices for freedom and democracy during our election last year. It was a glimpse of what was to come for you.

We ask that you allow us to join with you in this urgent push to take back our power, jurisdiction and authority from those who would end life as we know it. Together we can do so much more in unity.

We would like to hear from an appropriate attaché at the soonest possible time. We have been attempting to get a meeting with Rear Admiral David Proctor, the head of the Royal New Zealand Navy, as the RNZN still reports to the Queen and not the New Zealand Defence Force or Prime Minister. The Navy would also be able to assist us in our task.

Our Intelligence and Investigations head, Michael Stace, lives in Wellington and can be available for meetings at any time. Michael is also an American citizen. 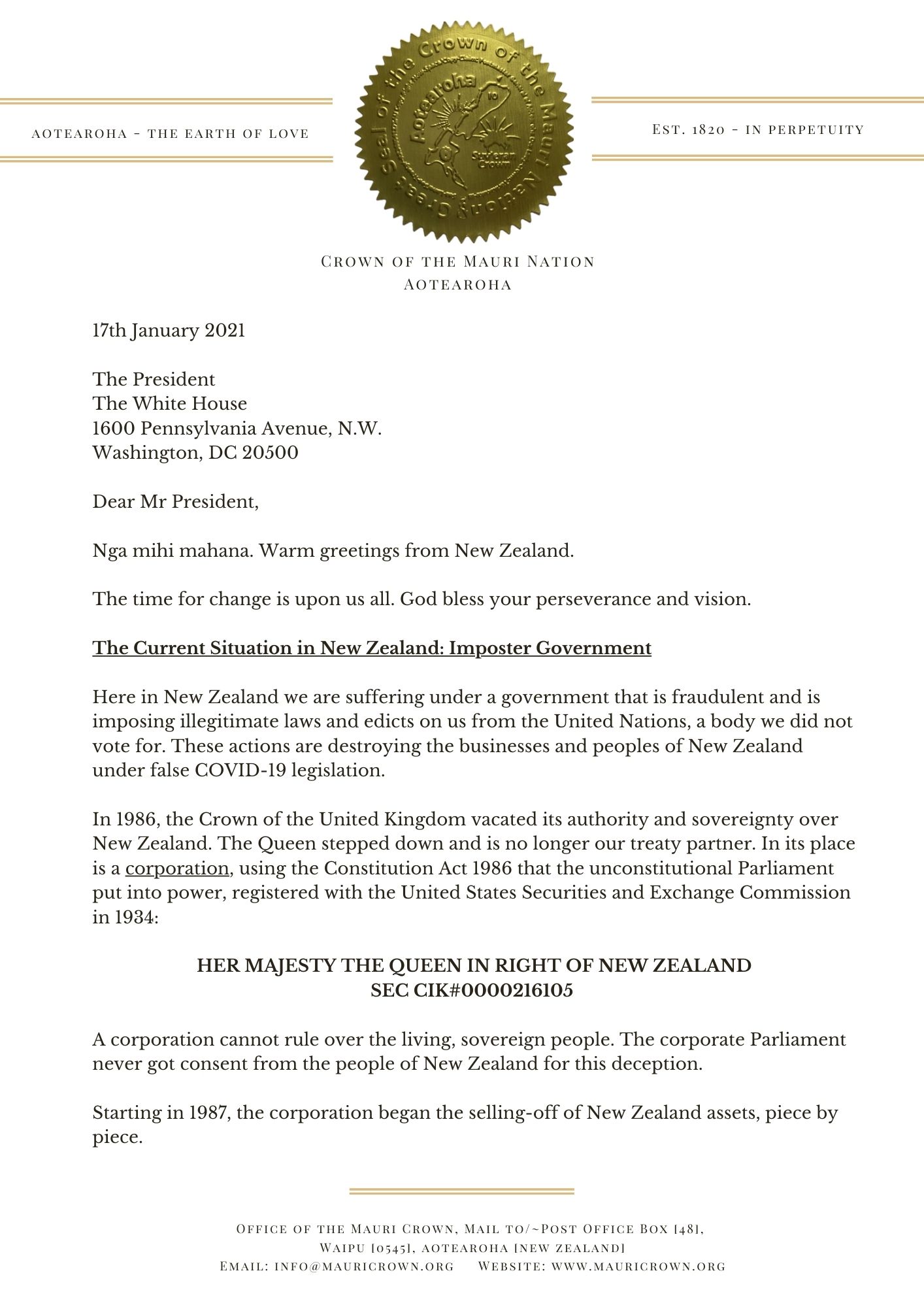 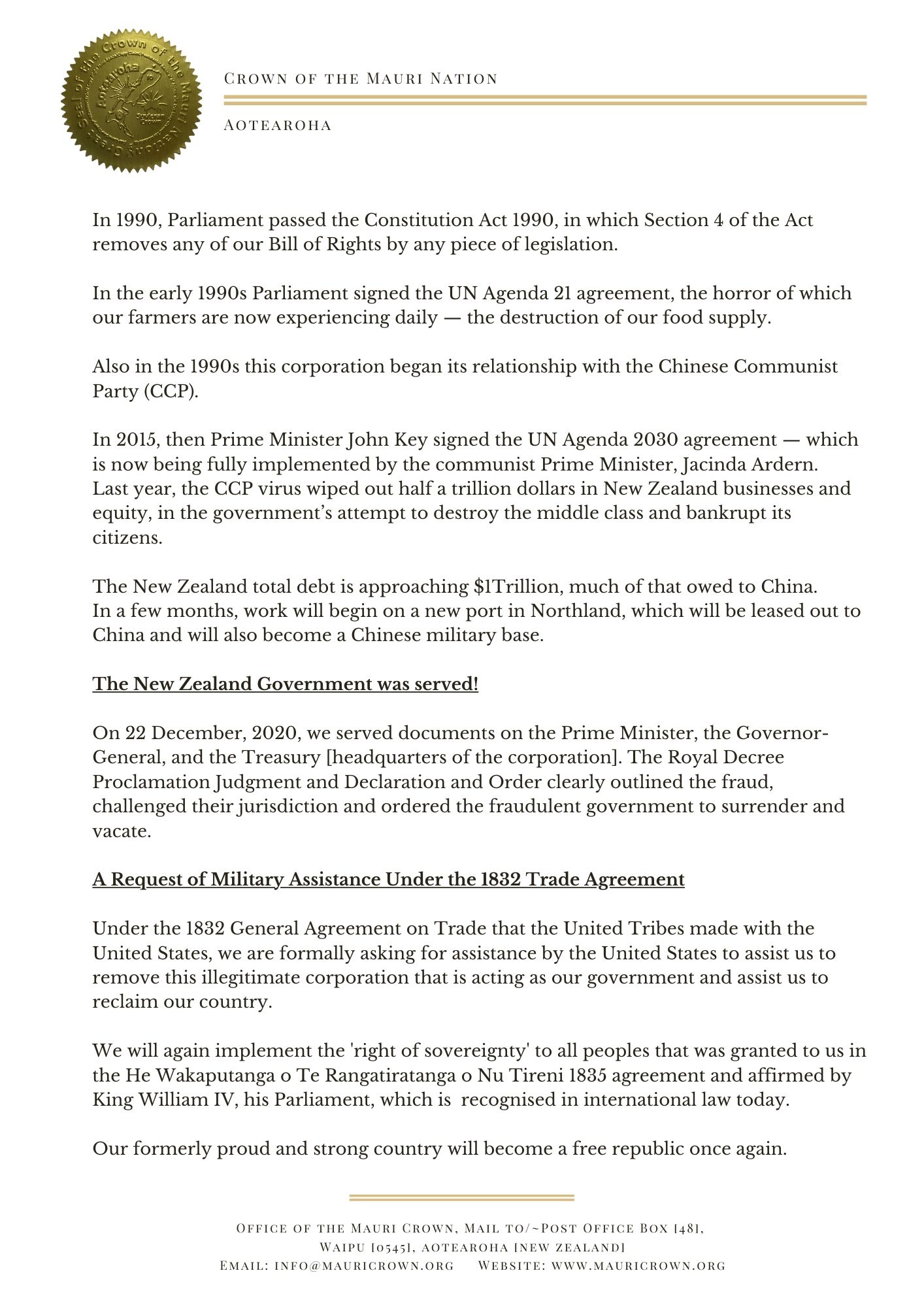 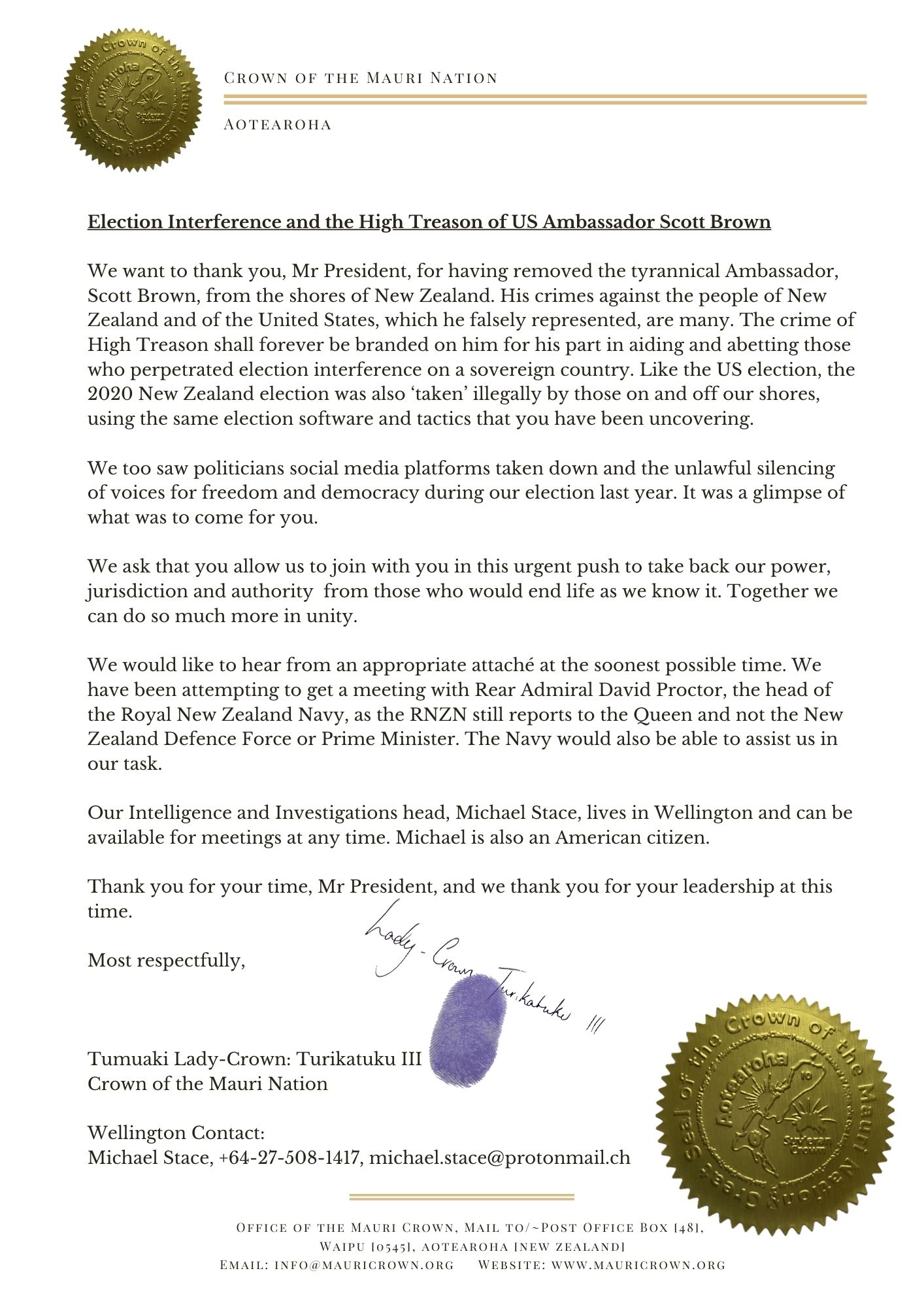